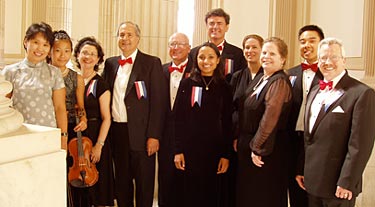 Washington — They came to make music, this growing chorus of dentists and dental students performing with the VA-National Medical Musical Group June 17 in a soaring celebration of flag and country.

We had but moments with them for a post-concert ADA News photograph, musicians standing high at a balcony in the Cannon House Office Building rotunda. This day they were alto, bass, cellist, flutist, soprano, tenor, trumpeter and violinist for the ninth annual Congressional Flag and Independence Day Celebration, “a cherished tradition on Capitol Hill” started in 1996 by the chairs of the Senate and House Prayer Groups.

They would soon resume busy professional lives in practice, in academia, in small town and big city America. But this day, dentist, dental student and not a few family members were musicians in concert “For the Love of America,” a two-hour salute to veterans and the military, the Cannon Caucus Room grand with “glory, glory, hallelujah” and “crown thy good with brotherhood from sea to shining sea.”

“It’s a part of our daily life; we sing all the time,” said Dr. Curlin, general practitioner and tenor in the mmg chorus who brought his family to Washington for a half-hour prelude of “Curlin Family Gospel Favorites,” the concert chorus and a post-concert banquet sing later in the day. The concert program lists father and son tenors, Mrs. Curlin and two daughters singing soprano.

Several VA-NNMG dentists did not perform in the June 17 concert. The VA-NNMG also has performed at the White House, for the United Nations and in major concert halls across America.

The VA-National Medical Musical Group, which styles itself as the nation’s largest medical chorale and symphony orchestra, draws members from the Department of Veterans Affairs health care system as well as the non-VA health professional community at large. Information is available online at www.medicalmusical.com. The June 17 concert was videotaped for later broadcast on the ABC Family Network.